Coast Transit Authority (CTA) was awarded Urban Transit System of the Year by Mississippi Public Transit Association (MPTA) due to its spectrum of work in transit. This was one of three awards CTA received. CTA has designed and implemented programs which demonstrate innovative concepts or effective problem-solving techniques which have been applied successfully in the public transportation industry.

In addition to the MPTA Urban Transit System of the Year Award, CTA also had the honor of Kevin Coggin, Executive Director of Coast Transit Authority, receiving Urban Transit Manager of the Year by MPTA. Coggin is a native Biloxian and lifelong resident of the Mississippi Gulf Coast. He has been employed in the ground transportation industry in the private and public sector for 42 years. Coggin has been employed with CTA since 1989. 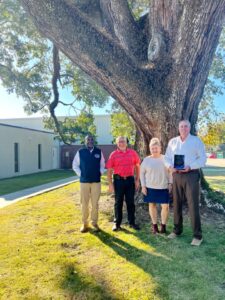 “We are so proud of you all. Mississippi Public Transit Association (MPTA) awarded Coast Transit Authority ‘Urban Transit System of the Year.’ I just want to thank all of the CTA employees and management staff for how hard you work throughout the year to serve our community and your dedication and professionalism. It’s well-deserved recognition.” Kevin Coggin, CTA Executive Director, said recently to CTA employees. “We want to thank the public for supporting Coast Transit Authority in everything we do,” Coggin added in a message to the public.

CTA also was given a “Friend of Transit Award” that went to Councilman F.B. ‘Rusty’ Walker, IV, of the City of Gulfport. Many projects would not have been possible without Councilman Walker’s active support and leadership. This award was presented at a Gulfport City Council Meeting on December 6.